Amparo Alepuz knows how to compose from the confusion between the subject and the object. She produces an epilogue of situations that have occurred in different eras, not defined by a common origin. Her ideas travel, they challenge themselves and create virtuality where the present runs as an extended net. 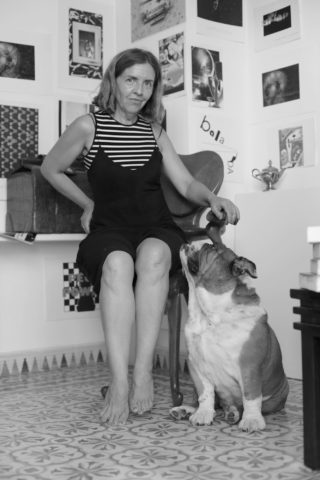 For me creation is a life experience, a constant search.

My artistic work goes back to the 80s when I started creating an intimate memorial composed of photographs taken with a Hasselblad camera that as well inspired me to draw and paint. In the early 90s I got my first personal computer, a Macintosh, since then the format and traditional techniques in my proposals coexist with new technologies.
From the belief that I belong to a world in which time is delocalised and paths are not linear, the file as a record, thesaurus and compilation is the paradigm of creation where my current projects arise

Going back, I dare to say, that the coherence of my work refers to the investigation of thinking and being feminine, basted through the concept of secrecy as a metaphor of the befall of women in history.
Secrets, in terms of the unseen, the stealth, the knowledge that someone possesses from the virtue or property of something, or a useful procedure in art or an occupation.
Series like METAPHOR, SUNRISE IS A SUNRISE GERTRUDE, SECRETS, come about in recent years to reach the last work in progress: SECRET SOCIETY MAKE-UP and PHENOTYPE a secret game.

The game goes on.

Alicante, 1963. Lives and works between Altea and Madrid (Spain)

Doctor and Bachelor of Fine Arts, studied at the San Carlos Faculty of the Polytechnic University of Valencia.

Since the year 2000 she is a researcher and a professor at the Faculty of Fine Arts of Altea at the Miguel Hernández University. Spain is where she teaches the Bachelor and Master degree.

In the 90’s she begins her professional career combining her personal work with approach in graphic design and illustration and collaborating in ideation and curator of exhibitions.

Currently, her artistic research focuses on the attainment of multidisciplinary projects from which she engages photography, painting, analogue-digital illustration and video.

Her project Secrets, curated by Néstor Ramírez de Arellano Conde, will be exhibited at the María Eugenia Haya’s room of the Fototeca of Havana, Cuba, at the Photographic November 2018 event.

From June to September of 2018 her work is exhibited at the Contemporary Art Festival In The Margin organized by The Factory of Contemporary Art at the National Gallery of Fine Arts in Amman, Jordan.

Since April 2018, the San Fernando Naval Museum in Cádiz has exhibited the imaginary portrait of Ana María de Soto, the first woman to enter the Spanish army in the XVIII century, under the guise of a man.

Occasionally Illustrates, since 2016, the literary articles of the writer Gerardo Muñoz that are published in the Diario Información of Alicante.

She collaborates with the perfumer Raquel Navarro in the design ideation of the latest olfactory creations: Nose and Jean Cocó Parfum.

She is a member of Mise en Plis, a research platform from which she shares projects with Rocío Villalonga and Lourdes Santamaría, her artist’s book Oui Dada c’est moi, the story of an egg participated in the International Announcement of Books of Artist. Emilio Sdun Memorial, organized by Red Book of Artist and the Drawing Department of the Faculty of Fine Arts at the Polytechnic University of Valencia, and in the SINDOKMA 2018 Book Festival held in Valencia by the Magazine of Visual Arts and Contemporary Culture MAKMA.

– Festival In the margin. Factory of Contemporary Art. National Gallery of Fine Arts. Amman Jordan. From June 27 to September 1 of 2018.
– Imaginary portrait of Ana M. De Soto. Work at the San Fernando Naval Museum, Cádiz. Permanent exhibition. Since April 2018.
– Exhibition Typography and Dada books, in SINDOKMA, book festival. Sala Oberta. La Nau Cultural Center. University of Valencia.
From the 27 to the 29 of November 2017. http://sindokma.es/
– Exhibition of the International Announcement of Books of Artist. Emilio Sdun Memorial. Espai NAU. Llotja Barcelona. From April 20 to May 19 of 2017.
– Emilio Sdun Memorial. Sala de las vitrinas at the Polytechnic University of Valencia. From February 3 to March 30 of 2017.
– Mediterrani: Mar de Murs. Centre Cultural La Nau Valencia. From the 6 to the 30 of October of 2016. Among the actions carried out in the Mostra Viva del Mediterrani 2016: culture and conflicts in the Mediterrani. Curator: Amparo Carbonell.
– Opening exhibition of the International Call for Books by Memorial Artist Emilio Sdun. Provincial Museum of Jaén. From October 11 of 2016 to January 30 of 2017.
– Menos es menos, más es menos, menos es más, más es más. Sala Pedro Celso, Frax Foundation. Alfaz del Pi Alicante May of 2016.

ARTWORK IN MUSEUMS AND COLLECTIONS

– Raquel Navarro. Perfumer
Graphic image ideation for Nose and Jean Cocó Parfum. 2018.
– Periodically illustrates, since 2016 the literary articles of the writer Gerardo Muñoz that are published in the Diario Información of Alicante in the Moments of Alicante section.
– Graphic identification of the DVD and vinyl. The Bar of the Alley. Samara Times. Factoria Rifi Publish. Sgae Foundation. Rock CD. From November of 2017 until June of 2018.
– Illustrations for the book Philosophical Notes by Alicia Vallina. Prologue: Ignacio Gómez de Liaño. Edits: Tejerina Foundation, Astrological Studies Foundation. November of 2017.